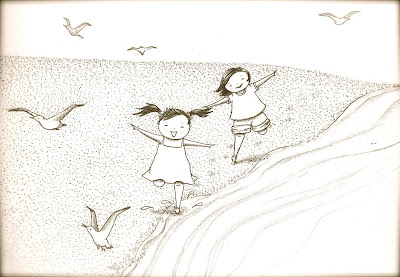 What was I thinking? Art and blogging in the summer? Say WHUT?
Nope, I can't do it.
Between spending time with friends and family, secretly poking my kids in line at amusement parks, combing the beaches for sand dollars and freaking the girls out with crab claws, and eating pretend spaghetti and drinking pretend tea at my kids' pretend cafe, I can't seem to find the time. But that's okay. After all, it's all about the kids, isn't it? I intend to soak up as much of their laughter and happy faces while I can this summer.
And hey, thank you all so much for your heartwarming wishes and beautiful sentiments on my last post. You made the event that much more meaningful, and I'm glad I could share it with you.
See you all in a couple of months! Hope you have a ridiculously fun summer (or winter, as the case may be).
XOXO
Posted by Bella Sinclair at 12:32 PM

The Fourth of July is just around the corner. It's a very special day for me, and not just because it's a holiday or the birth of our nation. It's the day Peter and I began dating, and as such, it had more meaning for both of us than even our wedding day. It was our beginning.
We met in college through a mutual friend. I was taking extra courses, and he was working on campus. A month after we started dating, he asked me to marry him, and I laughed. I didn't think he was serious, but he was. 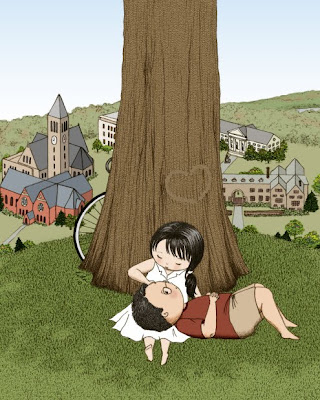 You and me, under our tree where you carved our initials.
When Peter formally proposed, it was in a restaurant called Sign of the Dove in New York City. It's no longer there, and I don't remember much about the menu or what we ate. But I do remember how adorably agitated he became when the waiter interrupted just as he pulled the ring box from his pocket. And I remember the delicious loaf of olive bread that the waiter gave us as we left, as much an apology as a congratulatory offering.
Last year, after Peter's memorial service in midtown Manhattan, the girls and I lingered behind a few days in the city. It was the Fourth of July once again, and the first year that the grand Macy's fireworks show would be displayed over the Hudson River. I brought the girls up to the rooftop deck of our hotel where we could see a narrow patch of sky between the tall buildings. When the first firework boomed, hundreds of startled pigeons took flight into the sky. In the darkness, they looked like a flock of white doves, soaring and swerving overhead in graceful unison.
It was the sign of the dove. 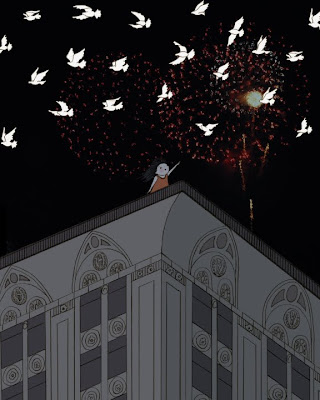 Happy Anniversary to my love.
Posted by Bella Sinclair at 7:18 PM 1,015 comments:

Bella Sinclair
Dilettante Extraordinaire. I'm an advertiser-turned psychologist-turned stay-at-home mom, caught between yearnings for intellectual stimulation and creative explosion and not being able to do either with full conviction.